The facts can not be argued that he will die sooner than later, he’s just not in the best of states.

But that he’s planning to enjoy Easter dinner with us in a couple weeks – that’s astounding.

His pacemaker still seems to be going, and when it stops, it’s likely that he’ll take a turn for the worse. (but I’d caution against taking that bet…) In the mean time though, he saw kids off to college, enjoyed Thanksgiving, opened Christmas presents, rang in the New Year, celebrated his daughter’s birthday, and just shared a bit of the Luck ‘O the Irish…

We’ve been turning away a stream of visitors that want his advice on picking batteries;-)

And so we have a guest in the office-turned-fifth-bedroom-turned-office and then back into a bedroom on the first floor.

Our eldest is beginning his life away from home and that perfect office that was a bedroom for fifteen years and was just about back to an office again is back to a nice little alcove bedroom.

Two others are off at college and my wife, daughter, and I have adjusted to the change reasonably well.

The angriest I’ve ever been at him…

Some might ask how I’m doing with my wife’s father living under the same roof.

To answer that question, I have to go back to the single incident in our 25 year marriage that most upset me. It was in this house, nearly fifteen years ago, and I think if you asked him, he might also recall it on top of the (reasonably short) list of issues we’ve ever had.

You see, the family had left for a weekend vacation, and when we returned, we found that he had remodeled our garage a bit. He’d added support braces, vents, and laid down some plywood to provide a loft for storage.

Here we are in our new home, our castle, and he’s coming over while we step out of the house and making it better for us (because he knows better) in a way we’ve never discussed (or even thought about). It was about boundaries, and to me at that moment, it felt like he didn’t think there were any boundaries to his involvement in his daughter’s and my family.

I was angry – but got over it.

I also believe that after figuring out where I was coming from, he understood.

And Bill – just in case I never fully expressed my gratitude for the improvement – Thank you for the garage fixer-upper, it has proved a useful update over the years.

Yes, my wife and I have relied on our fathers over the years. Each has their own niche. We call mine for plumbing issues, hers for electric. (Though I’m sure each is just as capable in both. Me – my strength is in computers…)

But somewhere after the garage incident, my father-in-law built the centerpiece of the back yard, the wooden play-set.

When we looked at the house, the previous owners had a smallish play set back there, but they kept it as a condition of the sale. With four children, we wanted to have something for the kids.

And this time around – he consulted with both of us.

Where it was to go, features to include, and general comments. And this time around, I was completely on-board. I’m sure he checked in more than he might have, and I in turn gave him freedom to build.

The result was tremendous – in all ways. Here, let me show you: 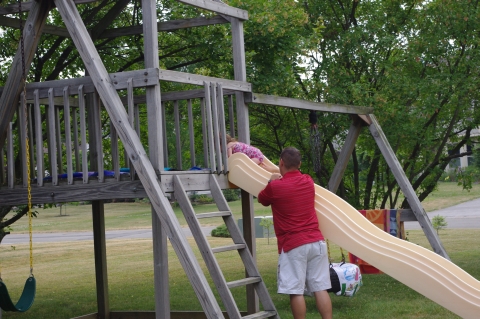 By way of scale, the picture includes the back-sides of a couple relatives having fun at one of our back-yard gatherings, one large, one small… The sandbox underneath and canvas roof have moved on to better pastures, and the rope swing on the far left is out of view. But you can probably tell that because of the size, the swings still get a good amount of use, and the kids have enjoyed the heck out of it over the years.

I enjoy getting out into the woods and finding my way around with the use of a compass and map – orienteering. Some competitors enjoy walking, I’m usually trying to go as fast as I can.

One technique that helps is counting paces from where you’ve been (and know where you are) to where you want to go.

If you’re under, you expect to find your spot ahead. If you’re over, perhaps you’ve missed it…

But when you lose count

Sometimes though, in spite of your best planning, you reach a point in the woods where you’re not quite certain where you are, and none of the landmarks around you look distinguishing enough.

You’re forced to come up with a new plan – on the fly – and deal with the terrain you find yourself in, and take one step after another.

And it’s still good to count your paces.

And now, because I can, I’m going to speak in the present tense: Bill – It’s been a pleasure having you here. Let’s see what adventure tomorrow holds for us, ‘eh?

[Bill was re-admitted to the Isaiah House April 19th. His pacemaker was adjusted June 17th to allow his heart to slow down to match the rest of his body. He passed on the morning of June 25th, a bit short of a full year since his original entry into Hospice care. I don’t believe his pacemaker’s battery ever did fail… SMT]